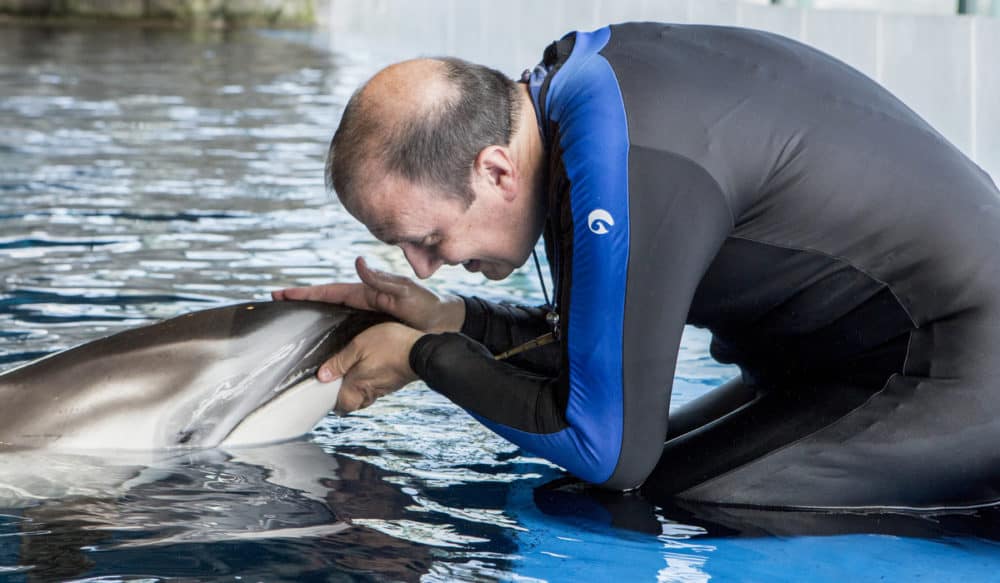 the power of relationships

Editor's Note: Do animals remember their trainers? Ken Ramirez sure thinks so. In this heartwarming tale from his new book The Eye of the Trainer: Animal Training, Transformation, and Trust, Ken Ramirez reflects on his unforgettable relationship with a dolphin duo and explores the unmistakable power of the human-animal bond. 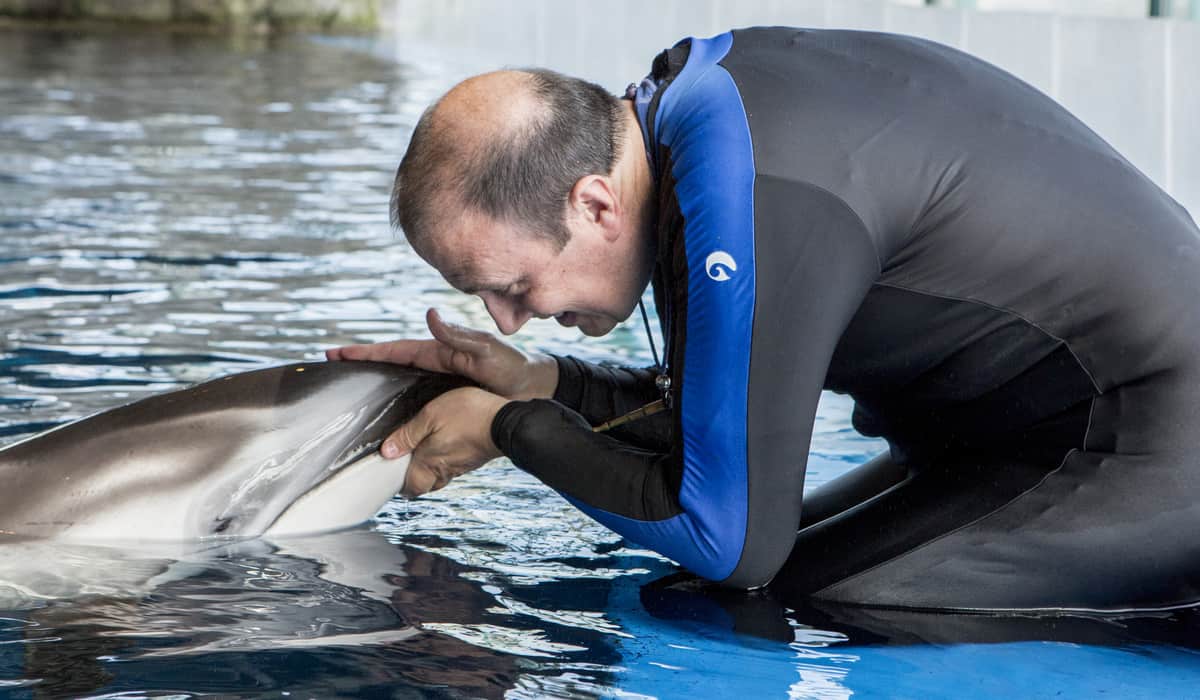 During my first few years as a trainer, I worked with a group of young bottlenose dolphins at a marine-life park in Texas. I have fond memories of two young male dolphins from that group, Hastings who was shy but playful and Lucky who was a survivor of a fishing net entanglement in the Gulf of Mexico. I was assigned to Lucky’s rehabilitation effort, and Hastings was one of Lucky’s first companions. I spent hours each day playing with and training Lucky and Hastings. In many ways, they were my first and best training teachers.

Together we developed a fun game that both dolphins enjoyed. I held their tails while tickling and massaging them, which caused them to relax and close their eyes. Their bodies went limp as I held their tails, and they allowed me to push them under water then pull their tails up a few feet above the water’s surface. I repeated this over and over until my arms wore out. After 15 minutes, my biceps burned as if I had been lifting weights, but Lucky and Hastings never seemed to tire of the game.

Other trainers tried to replicate the game, but neither Lucky nor Hastings allowed others to play. Both dolphins enjoyed a good rubdown from the other trainers but never allowed those trainers to play with their tails. Whenever trainers tried the game, Lucky and Hastings swam away, uninterested in playing, or, if I was there, they swam over to me. I remember one of the senior trainers telling me, “That means they trust you. No animal likes to have their means of locomotion restrained; their tails are how they power through the water. They would never let you hold them like that if they didn’t completely trust you!” I remember feeling proud that I had gained their trust. I felt as though I had forged a real relationship with Lucky and Hastings.

After working with Lucky and Hastings for three years, I was offered an opportunity to move to Mexico City to work as a trainer with a new, diverse group of animals. The idea of gaining new experiences and working with new animals was exciting, but it also meant saying goodbye to the many animals I had come to know and love for the previous three years. My last day in Texas was sad: I knew I would miss the staff and, most of all, I would miss the animals, especially Lucky and Hastings. The last thing I did on my final day was to play the tail game with my two favorite dolphins. I think we played for 45 minutes. I didn’t want the playtime to end, and neither did Lucky nor Hastings. I knew I was leaving them in good hands; they had great relationships with many other trainers, but saying goodbye to them was still hard.

I share this story with people whenever they ask me if animals remember their trainers, because there was no question that Lucky and Hastings remembered me.

I was in Mexico for just over two-and-a-half years and never had the chance to get back to Texas for a visit. But when my contract in Mexico ended, I was asked to return to Texas, and I was excited to be reunited with my trainer and animal friends. On my first day back, my supervisor was touring me around the area showing me things that were new and reintroducing me to all the animals. There had been lots of changes, but it felt so familiar and comfortable. As we approached the dolphin habitat, my supervisor began pointing out who was who. Most of the animals were very familiar to me, but they had grown, and it had been more than two years since I had seen them.

As I looked into the water, there were three young dolphins vying for our attention. I did not know them but was learning each of their names when suddenly two larger dolphins swam up from below, displacing the three youngsters. They were Lucky and Hastings! They stared at me, and I stared at them. I wondered if they would remember me after an absence of 31 months. I was so pleased to see them! I looked at my supervisor and asked permission to pet them. He smiled and said, “I think you should do more than that.” I glanced back and both Lucky and Hastings had rolled over and were presenting me with their tails.

I joyfully grabbed their tails and played the tail game, exactly as I had played it on my last day with them several years earlier. My supervisor shook his head and said, “We can continue the tour later, you should stay here. I haven’t seen them play that game since you left.” As he walked away, I welled up with tears. It meant so much to me to be reunited with Lucky and Hastings, my first real teachers. I was happy to be back, and I think Lucky and Hastings felt the same.

I share this story with people whenever they ask me if animals remember their trainers, because there was no question that Lucky and Hastings remembered me. Over the years, I have encountered many examples of the special relationships trainers form with animals, and I have seen it with many different species.

See the world through Ken's eyes. See it through The Eye of the Trainer.

GET YOUR COPY NOW