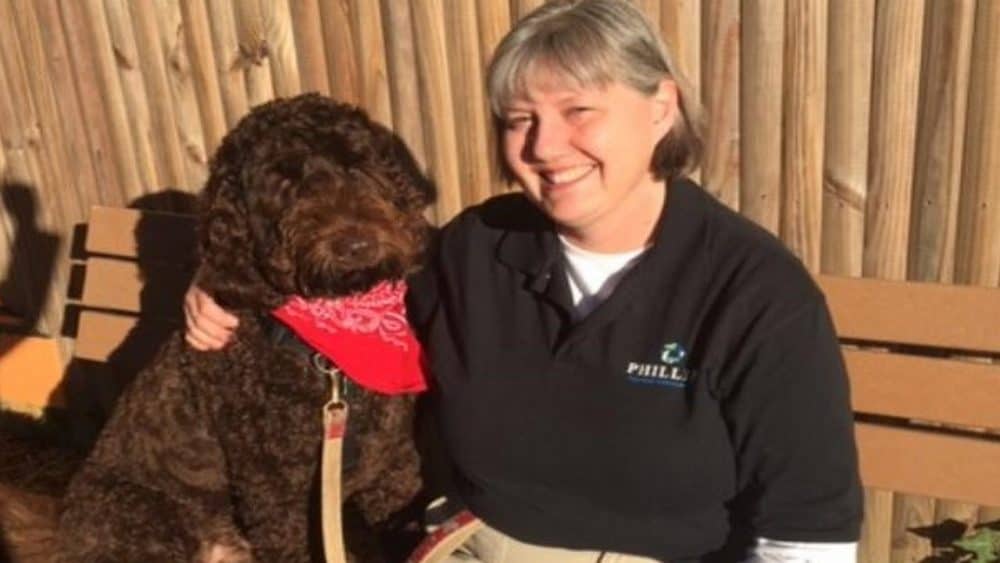 November 2019 KPA CTP of the Month

Laura Heyer, KPA CTP, an experienced educator of children with behavioral and developmental disabilities, has utilized—and extended—that special skill set in her pet-training career. A trainer at C&C PALS, she offers basic training and puppy classes as well as private, in-home training.

Karen Pryor Academy (KPA) was first on Laura’s radar when she ran across references to it on social media. While she had been teaching group dog-training classes for eight years, Laura was concerned with what she saw as “gaps in my training knowledge and mechanical skills.” However, the timing was not right to pursue the KPA Dog Trainer Professional (DTP) course. Her dog, perhaps the perfect training partner temperamentally, was suffering from kidney disease. After that dog died and a new puppy joined the family, Laura researched the DTP again. 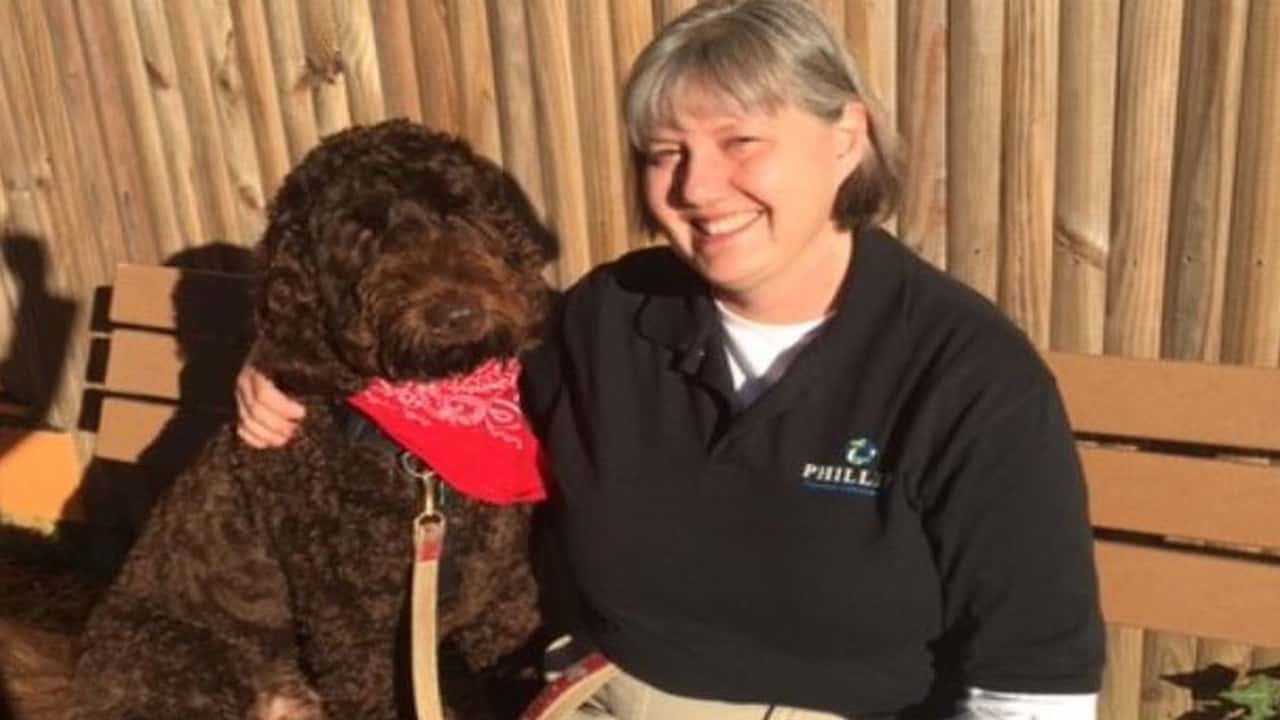 The DTP “looked like it would cover multiple topics that would be helpful,” Laura remembers. She was interested in expanding professionally, specifically in the areas of training skills, teaching people, and business concepts. Although the program seemed demanding, and the time frame to complete the program equally challenging, Laura saw it as “the “kick in the pants I needed to move forward instead of staying stagnant.” She completed the DTP program locally in northern Virginia under the direction of Laurie Luck, earning KPA CTP status in August 2018.

Laura’s KPA partner was her puppy, Fisher. Fisher was just 10 months old when they completed the KPA DTP course. His young age presented some challenges. Laura admits that she was lucky the course was held so close to home. “I don’t think we would have made it if we had needed to stay overnight somewhere other than our own home!” As a puppy, Fisher’s attention span was limited. “He didn’t have much stamina and didn’t care much about treats for the first couple of months,” says Laura. Laura learned to restructure and refocus her training sessions to accommodate Fisher’s limitations. Standard training sessions put Fisher “over the top” or bored him. Laura had to address her own frustration and impatience, and rework training time with Fisher, in order to preserve a positive relationship with her dog. “I learned to quit if I started to get frustrated and I learned that a short session, even one unsuccessful attempt of a new behavior, is okay. Laura found that “short sessions were more productive, and both of us had a lot more fun.”

Typical of puppies, Fisher experienced a fear period. He became scared of a box Laura used as a training prop when “it tipped up and hit him in the nose.” Laura remembers that the incident set them back until Fisher “re-learned that interacting with objects that weren’t his usual toys could be fun.” Laura had to re-learn some things herself. “I had a rudimentary understanding of shaping and targeting, as I had done some of both, but did not grasp how useful those skills truly are” until the DTP. Fisher and Laura struggled with some shaping and targeting exercises. Lovingly, Fisher was called “Baby Shark” because he tried to get everything in his mouth. According to Laura, “his nose target often became an open-mouthed grab.”

Laura’s DTP program experience has had positive impact on both her dog training work and her work at PHILLIPS School. She has introduced new lessons to the group classes she leads at C&C PALS. “I am trying to help people understand more about the use of the clicker, and I am presenting loose-leash walking in a way that is different from what I learned.” Instead of focusing on negative punishment mixed in with some positive reinforcement, “positive reinforcement and working in small steps, the way that I learned in the DTP,” has been more systematic and successful. “I see people and dogs grasping the concept so much faster now when I use dots on the floor as guides for clicking and treating.” Laura also offers specific and succinct positive feedback to clients. “Trying to remember the funnel and distill it down to the doable, brief direction has been very helpful to me.”

Laura’s second workplace is PHILLIPS School in Annandale, part of PHILLIPS Programs, a non-profit organization serving young people around the VA-DC-MD metro area with behavior and developmental disabilities. “Our students are complex and have a variety of needs. Many have significant learning difficulties. Some of the students have cognitive or developmental delays, some have mental health issues, and many are impulsive and have difficulty focusing,” explains Laura. She praises PHILLIPS School as a “flexible and supportive organization,” encouraging the different projects and ideas Laura has proposed for her students, some of which involve her dogs. “I am fortunate that my dogs like children and have been comfortable in our school environment.”

For example, Laura and her previous dog, Saffie, helped a student overcome her fear of dogs. “Initially, we couldn’t even be at the opposite end of the hall from the student without her panicking. We started learning about dog body language and then practiced ‘hanging out’ with my dog. We progressed to giving Saffie cues from a distance and then clicking.” Laura discovered that Saffie had some wariness around the student’s wheelchair that had to be overcome as well, but both students succeeded. By the end, the student in the wheelchair “was able to hold the leash to have Saffie walk her to the bus.” Laura reports that her student gained confidence overall. “She had been afraid to try new experiences or participate in off-campus activities. After this breakthrough, she blossomed and even attended a disabilities advocacy event at the White House!”

Recently, Laura took on an ambitious five-week summer project working with students ranging in age from 7-10 years old. “I wanted a very structured but fun activity with an end goal. I proposed helping Fisher get his Novice Tricks title.” For the first week, Laura focused on basics like how dogs learn, a treat-toss activity, a clicker game to practice using the clicker, and a brainstorming activity. “The next three weeks we worked on teaching specific tricks, almost all of which I had at least tried to introduce to Fisher. Except for ‘shake,’ he wasn’t fluent with any of them.” While Laura practiced with Fisher a little bit at home, “the tricks were mostly taught and practiced at school with the students.” Laura invited a fellow KPA CTP to school to watch students help Fisher perform some of the mandatory Novice Tricks. “In all, I think they were able to get Fisher to perform eight tricks!” She points out that her students have short attention spans and can struggle following directions and taking turns. However, sometimes it was Fisher who had a hard time! “I could talk to my students about getting bored, feeling confused, or being frustrated. When I framed Fisher’s behavior that way, you could almost see the lightbulb go off. By the third training session, students could make connections and start making decisions based on whether they thought Fisher might be getting bored or frustrated. Fisher doesn’t tend to stay focused on a task for too long, but he has a longer attention span than some of the students. It was amazing to see them stay focused together!”

Laura has seen changes in her own life, like renewed confidence and patience, that she attributes to her time in the DTP program. “Believe me, I doubted my skills throughout the DTP program itself, but the moment that Fisher and I finished the chain—including when Laurie rearranged it and picked parts we had almost never put together in that order successfully and he nailed it—was an amazing feeling.” Laura also feels more empathy for clients now. Before Fisher, her puppies were easy to train. Now she is “more understanding of how hard it is for many clients in my puppy class who have puppies that act like puppies!

Laura has seen changes in her own life, like renewed confidence and patience, that she attributes to her time in the DTP program.

Recently, Laura has begun using clicker training skills with her my father, who has dementia. “Motor directions are extremely difficult, particularly if there are several steps involved. Instead of trying to get him to swivel into the correct sitting position, now I can say ‘put your foot on my hand’ and then use modified targeting to help him turn into the correct position.”

Laura is interested in some of the KPA courses that are available online and in attending ClickerExpo again, after a “mind-blowing” experience at the conference last spring. A Tellington TTouch practitioner, she is also exploring Nose Work. She shares that “a short-term goal is to work on the next Trick Dog levels with Fisher and include students in that process. I may go ahead and become a Certified Trick Dog Instructor.” Looking further ahead, Laura is considering service dog training and offering day-training for clients. “I’d like to increase the number of positive options in the area for people looking for basic training for their dogs.”