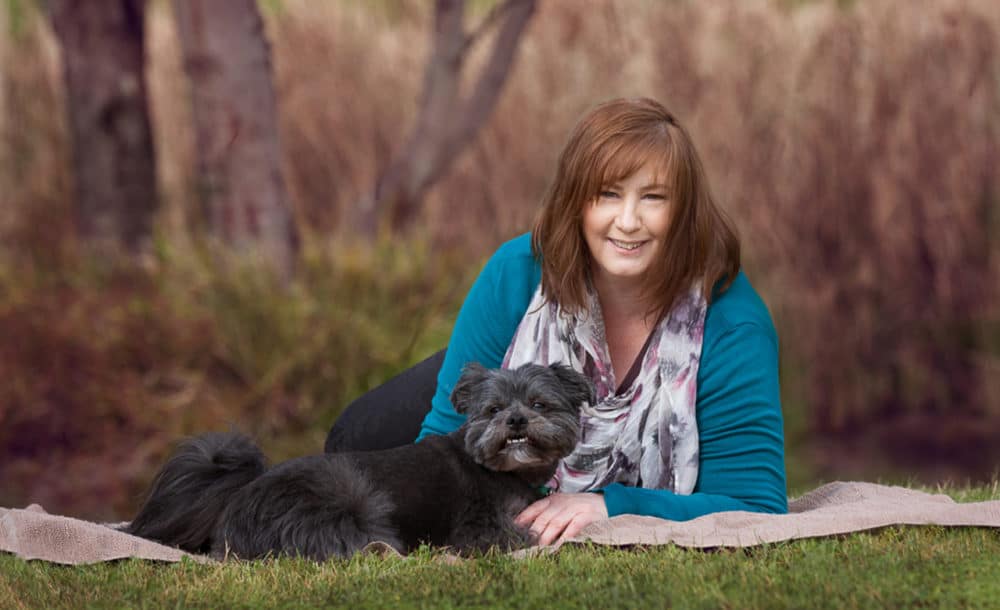 One of the first graduates of the Karen Pryor Academy (KPA) Dog Trainer Professional (DTP) program held in Australia, April Williams, KPA CTP, considers Karen Pryor her inspiration. Her dog, Archie, also inspires her; he completed the DTP program with April in 2016. 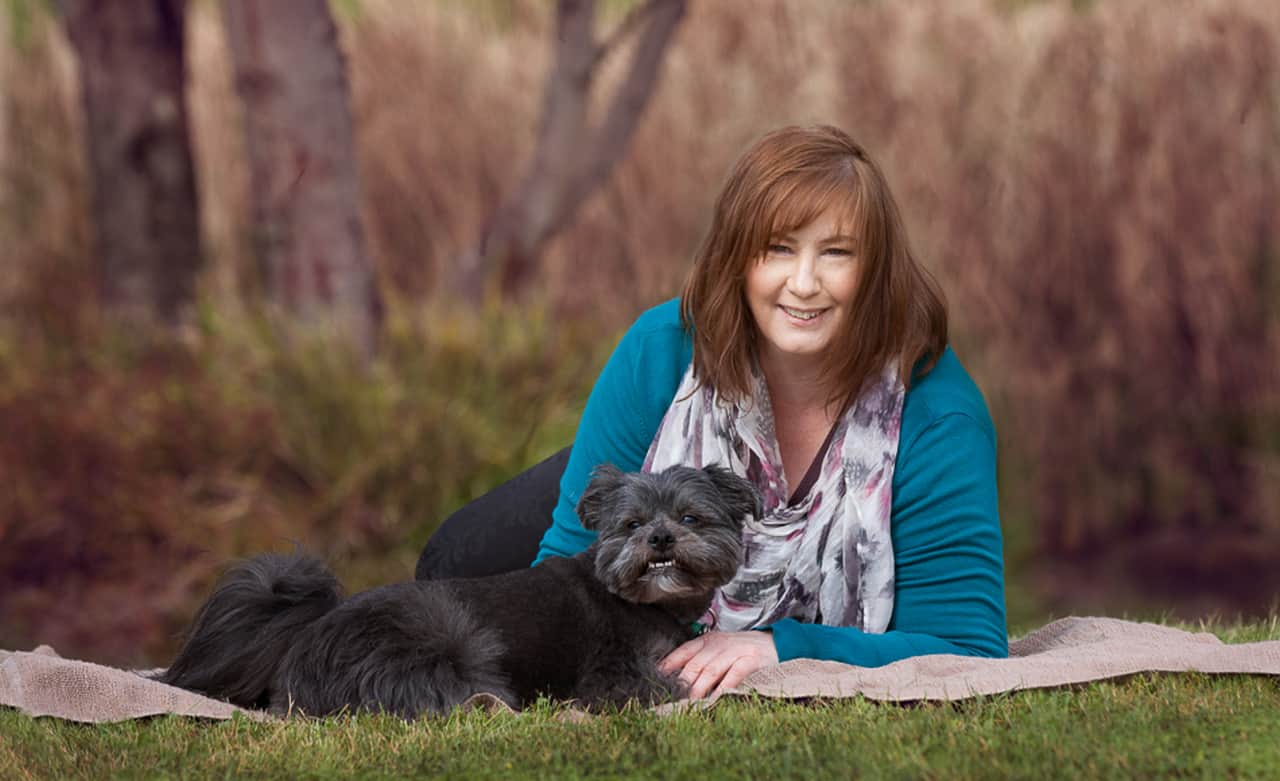 April’s introduction to Karen Pryor and clicker training came via Karen’s book Don’t Shoot the Dog. Her discovery of the KPA website and KPA course offerings came next. At the time, April lived in Melbourne, Australia, and travel to the United States was unrealistic for her at that time. On a subsequent visit to the KPA site, April learned that the DTP program was going to be offered near her. “You can imagine my delight when I discovered the course was to be offered in Australia—in Melbourne, no less, my city of residence.” April applied for the course (the first to be held in Australia) and was accepted.

Before the KPA DTP course, April knew about and practiced positive reinforcement training. She had been using the clicker to train with Archie, and credits Archie with their early success. They were determined to learn more. April admits, “I thought I had a pretty good handle on it until I started the course” but she was amazed at how much new knowledge and experience she acquired. “I love how effective clicker training is, and I saw significant change in the relationship between me and my dog,” April shares. Now April sees the same results with the clients she helps, people who thought their dogs were “dumb mutts.” April explains that clicker trainings is “so rewarding, especially for those who are invested in making changes in order to see changes in their dogs.”

Along with nine other students, April completed the very first KPA DTP program In Australia, finding it “challenging and enlightening.” The program followed the established model and included online modules, written assignments, online exams, and workshops. The final assessment of 10 chained behaviors was the culmination of the course. “I loved every minute of it,” April remembers.

April chose a mouse as the second species she was required to train during the program. The mouse provided more of a challenge than her canine friend, Archie, did! “Archie is pretty quick. I sometimes found it difficult to keep up with him, as he is a busy little fellow. The mouse, however, was a lesson in patience.” April admits that discovering what motivated her mouse was the hardest part of the second-species challenge, and of the program! “It took me quite some time. We finally settled on sesame seeds, but it was a slow slog. She was adorable, though, and I had a new-found admiration for mice.”

All About the Hound, April’s business, offers puppy and dog training classes and private lessons, daycare for dogs, and dog-grooming services. In all of these areas, April has found clicker training to be helpful. Her “groomabilities” program introduces puppies to the grooming process and helps dogs that already have a dislike of grooming “change their view of their experience.”

A recent client challenge, and its successful ending, emphasize the value of April’s work. Teddy was a 12-month-old dog that had vehemently resisted previous grooming experiences. He had been rejected by many groomers in the past who claimed that he was “too feral” for grooming. In several cases, almost as soon as the appointment began, Teddy’s owner was called back to retrieve her dog. April was approached for help by the desperate pet owner. “Using clicker training, Teddy was putting his head through the grooming noose in three sessions. Five weeks on, he is tolerating being touched, handled, and brushed. He walks in with enthusiasm and confidence,” April reports. “When he came to me, I thought that his progress would be extremely slow, but his progress has been remarkable. There is a long way to go, and I think he will always be a difficult dog (sensitive and suspicious), but it is encouraging to me that he is doing so well.” April acknowledges that if it were not for the training and the dedication of Teddy’s owner, “inevitably, he would have needed sedating each time he was groomed.”

Positive training allows April to help dogs like Teddy and their owners, and her successes raise her business profile and reputation. “Since KPA my business has grown exponentially,” reports April.

Since KPA my business has grown exponentially.

April credits much of her confidence and happiness to her KPA experience. The KPA DTP “course has shown me that I am capable, and I am quite good at my work.” In general, April believes that the philosophy behind KPA has “completely changed my whole way of thinking. I focus on the positive (rather than the negative) and apply this philosophy in my life beyond dog training, to everyone and everything.” Because she tries to project a positive and happy disposition, April believes that “it changes the way that people interact with me in return. I have learned that it really is how we choose to deal with things that determines whether they change for better or for worse.”

Recently, April moved from Australia to her homeland of New Zealand and is busy building her relocated business. “When I was in Melbourne (Australia), I lived in a big city where clients were educated, well informed, and well-to-do. They were willing to spend money to get the best for their dogs. Moving to a more rural location (in NZ), I have observed a different attitude toward dogs (predominantly farming) and the old, more outdated, misinformed training methods still prevail. I would like to show people that getting a great training result or outcome is possible using a wonderful communication tool—the clicker.” Just as in Australia, April believes that in New Zealand “a very real shift in the way we view dogs will lead people to want to do better for their dogs.”

While dog training in Australia and New Zealand is largely unregulated, April has noted “a growing consciousness among dog guardians about treating their dogs better. An emphasis on working in a collaborative way and building stronger bonds with dogs is building.” While trainers following the philosophies taught by KPA are still a minority, April sees that pet owners are becoming more informed and educated about gentle and force-free training. “They are searching for trainers who use methods based on science and behavioral analysis,” she says. April is proud to be part of that “growing momentum and movement.”

April had hoped to attend ClickerExpo 2019, but her move and the New Zealand/USA exchange rates have pushed that goal out to the 2020 conference. She continues to attend webinars, local/national seminars, workshops, and conferences and explores the many opportunities that clicker training presents. “There are a so many things I would like to do!”

that she “extols the benefits of clicker training to anyone who will listen,” April loves her life right now. “I am living the dream. I could not imagine doing anything else.”