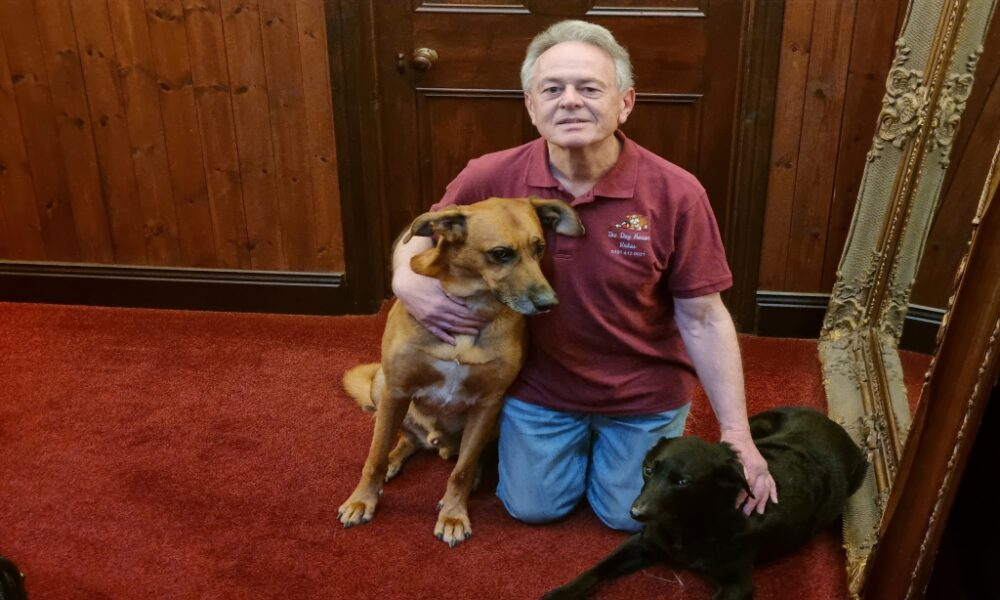 Stephen Bell, KPA CTP, describes himself as having a strong affinity for animals, especially dogs, from a very early age. Although he dreamed of working with animals, he followed a very different career path, to electronic engineering. After running multiple high-tech companies, Stephen launched his own tech business in the energy sector, which allowed him to work from home and provided time and opportunity to start working with dogs. 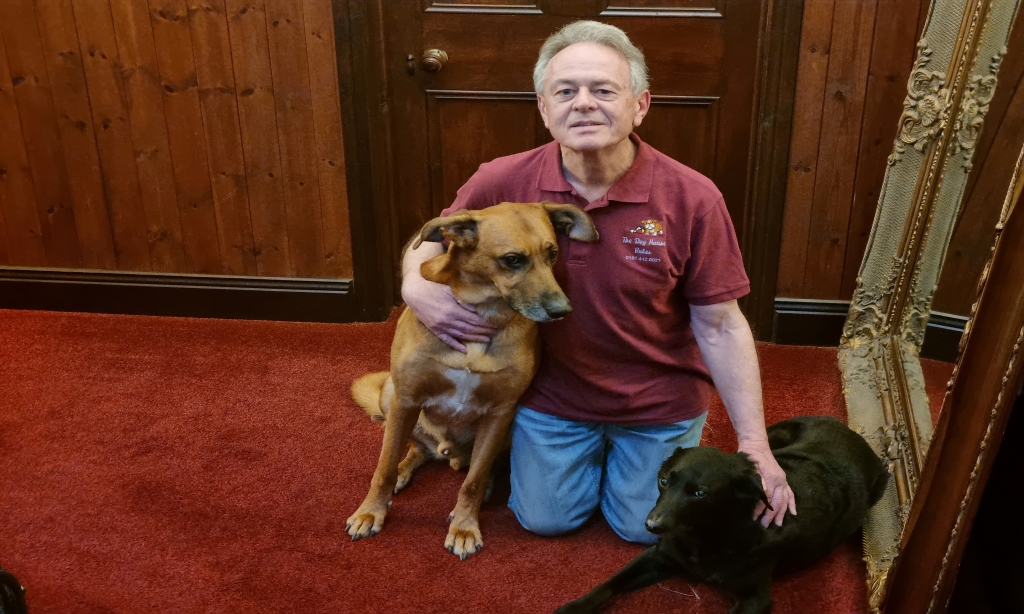 Stephen offered boarding services and could not resist adding in some training! With his interest in animal training only increasing, Stephen decided that he wanted to learn more. After completing Sarah Whitehead’s “Think Dog!” online certificate program, Stephen attended a “Think Dog!” two-day practical course at the Battersea Old Windsor Dogs & Cats Home. Dogs of various breeds, backgrounds, and characters were selected at random from the rescue center to be clicker trained by the attendees. Stephen was amazed at the immediate and effective impact of clicker training on these dogs; clicker training was totally new to the dogs and the attendees, plus it was the first time the dogs and people had met!

As a direct result of this experience, Stephen was inspired to become a certified professional. “I felt that a formal, accredited qualification was critical in terms of credibility and integrity, as well as my own learning.” Acknowledging that certification in the animal training sector is not fully regulated, Stephen researched all of the options that were available, filtering out programs that were not formally certified or accredited through the ABTC (Animal Behaviour & Training Council) in the United Kingdom. “I even had a scoring system!”

Stephen found that the Karen Pryor Academy (KPA) Dog Trainer Professional (DTP) program “was far and away the best, with its combination of online learning, practical physical workshops (in partnership with your own dog!), and inclusion of business modules.” He appreciated that students were required to work with a second species, as well as with a dog. Stephen’s research concluded that the KPA DTP program was “the most rigorous and comprehensive and had the highest standards.” He knew that the program would be the most challenging and difficult. “If I was going to do this, it had to be the best!” Stephen was also motivated by Karen Pryor’s stellar reputation and her role in making the use of the clicker widespread.

If I was going to do this, it had to be the best!

Leading up to his enrollment in the KPA DTP program, Stephen attended the 2019 “Woof!” Conference organized and run by Chirag Patel. “I had my mind completely blown by presenters including Joe Layng, Julie Vargas (B. F. Skinner’s daughter!), Kay Laurence, Sarah Fisher, Emilie Johnson Vegh, Eva Bertilsson, and Theresa McKeon, as well as by Chirag Patel himself.” He met other KPA CTPs, which helped reinforce his choice of KPA. Attending ClickerExpo Luminos later that same year and meeting Ken Ramirez, Grisha Stewart, Susan Friedman, and Jesús Rosales-Ruiz (“what a group!”) was an unbelievable experience for Stephen. It was a final confirmation that “this was the right path!”

Stephen completed the KPA DTP program’s final assessment online in 2020; most of the course was conducted in 2019 in Peterborough, United Kingdom, with Sara Benton, the first KPA CTP in the United Kingdom. Stephen’s final assessment had to be conducted virtually, due to the pandemic. “It was a bit of a novel challenge at the time, but it all worked out perfectly in the end.”

Stephen reports that all elements of the DTP program were useful and illuminating for him, “from the basic principles to advanced concepts like shaping and chaining.” Stephen and the other students in his program found shaping and chaining rather daunting at first, “especially when we saw that there was a practical assessment requiring us to teach and demonstrate a 10-part chain with a number of associated rules!” While the challenge seemed close to impossible at first, Stephen and the others came to realize that they were fully prepared to pass the assessment by the end of the program.

Now that Stephen is implementing the concepts and principles he learned individually and in groups in the KPA DTP program, he finds the force-free, positive approach most satisfying. “Focusing on what you DO want produces the most effective results in a very timely manner.” With Dogs Trust, the UK's largest Dog Welfare Charity, Stephen has been a specialist foster caregiver, working with some of the most challenging cases in which “even some of the organization’s own consultants had doubts about any real progress being made.” While the clicker was not always introduced straight away, Stephen reports that it often enabled rapid progress. He offers examples of success stories of dogs, including “she who shall not be touched” and “the dog who would not turn round.” After their rehabilitation, all of the dogs were rehomed successfully.

Stephen has had similar dramatic results with his own canine clients, which are predominantly rescue dogs that often have reactivity issues. He has used the clicker to establish key foundation behaviors, including targeting, stationing, and pattern games, in order to deal with specific issues. “In my general training, I have found shaping and clicker training to be extremely powerful techniques in teaching and consolidating a range of new and alternative behaviors very quickly.”

Stephen was fascinated to learn about TAGteach, marker-based learning with humans, from Theresa McKeon. He is especially interested in how TAGteach helps students with learning difficulties for whom other techniques have not worked well, if at all. “The results are often dramatic and startling.” Focusing on “yet another aspect of Karen Pryor’s legacy,” Stephen always tries “to adopt the positive approach in all areas of life.” He works as a personal coach, making the positive principles the heart of his approach. Stephen has found that the underlying principles that he first learned from the KPA DTP program and that were reinforced by TAGteach and subsequent educational programs have drawn together all the various strands. “These principles have helped me understand why I am drawn to these activities—and how it is all connected.”

Always learning, Stephen has completed an extensive range of courses and has attended several conferences. “Of course, the best conference is ClickerExpo!” Stephen points to Susan Friedman’s Living & Learning with Animals course and Michael Shikashio’s Aggression in Dogs Master Course as courses that have stood out. He tracks all KPA offerings, including the webinars, and has attended nearly every “Live from The Ranch” episode from the program’s start. “Naturally, I am interested in anything that Ken Ramirez is involved in!” Stephen also follows Grisha Stewart and Michael Shikashio and is a member of Sarah Whitehead’s Inner Circle.

Stephen would love to attend a course at The Ranch with Ken Ramirez. Another goal is to work with a range of other species, especially wild animals. “I have always loved webinars and presentations involving those species.”

The exclusive distributor of the Clicino in the UK, Stephen is also writing a book titled Coaching Dogs, Training People, which is due to be published very soon!