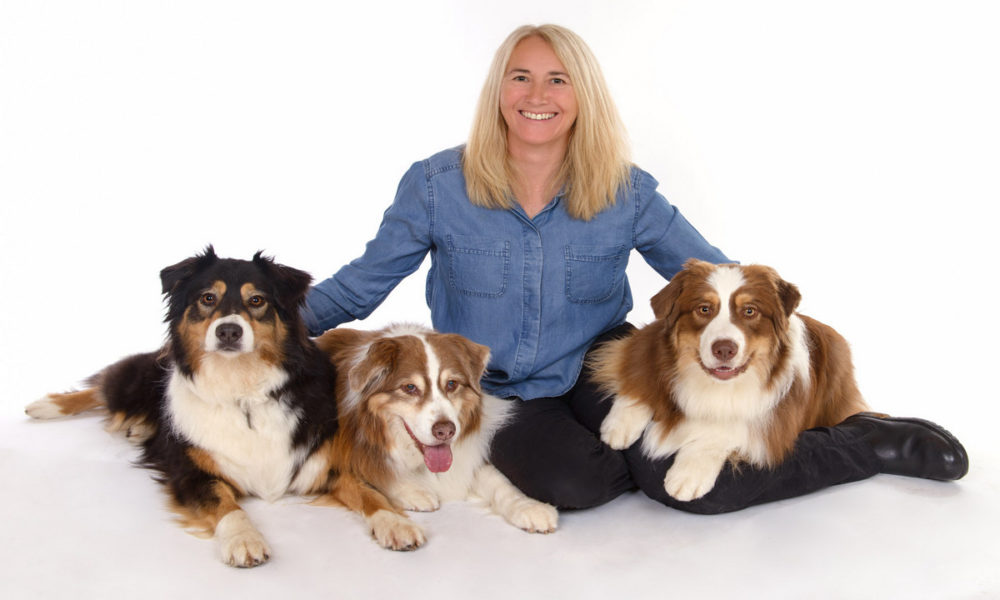 In this interview, Alexis shares highlights from her own training career.

Q: How did you get started with clicker training?

A: I started in 1999. I was a pet owner attending a traditional training club with my own dog, Hamish, an Akita x Collie. We had graduated through the obedience classes and had started agility training. “It would be fun,” they said! We were not having fun.

I was a novice dog owner and uneducated about canine communication, but it was clear to me that Hamish was not having fun being pulled through weave poles on a check chain. When the instructors would take him from me he would shut down and not do anything for them. They said he was stubborn and I was told it was because of his breed. I thought there must be another way. The internet was fairly new, but I searched agility training, started to come across the term “clicker training,” and read about clickers. It sounded interesting! I purchased the book Getting Started: Clicker Training for Dogs by Karen Pryor and two clickers from Karen Pryor Clicker Training. I also found an article about teaching weave poles using a clicker.

I set up poles in the backyard and waited. I still remember the moment when Hamish turned and looked at me during training. If he had been able to say something at that moment I’m sure it would have been something along the lines of “Yeah, I get it! I would have done this earlier if I knew it was what you wanted.” Once my clickers arrived, Hamish never wore a choker chain again; I have never used one since. There was such a dramatic difference in the training. It was fun and such a clear form of communication that I wanted to learn more—and share this knowledge with others. I began to study positive training. In 2002, I earned my Certificate IV in Dog Behavioural Training and set up my own dog training business.

Q: What has been the most rewarding part of your KPA experience?

A: It may sound like a cliché, but it is difficult to pinpoint the most rewarding part! The people are great—from the staff in the head office, to the faculty members and alumni. People treat each other with genuine respect and are kind, considerate, and supportive. I have been encouraged and supported as a student, as an attendee at events, as a Certified Training Partner, and throughout the process of becoming a KPA faculty member myself. I have made some solid friendships along the way.

Q: What are some key things in the DTP that you believe all clicker trainers can benefit from?

Q: How did you get involved with KPA?

A: I hosted Terry Ryan in Adelaide when she presented a Coaching People to Train Dogs workshop. A number of people were interested in furthering their education and training skills. Terry talked to us about the Dog Trainer Professional (DTP) program. I signed up and completed the International Program with Terry Ryan in 2011.

Q: Tell us a little about how you use clicker training?

A: I use clicker training in all of my group classes. It is an excellent tool for effective and efficient training. I also do behavioural consultations and work with many reactive dogs. I find that using clicker training with these dogs seems to make skill-acquisition easier. It also provides powerful tools for training dogs that are fearful of being handled.

From basic to advanced skills, there’s a course for you.
VIEW ALL COURSES