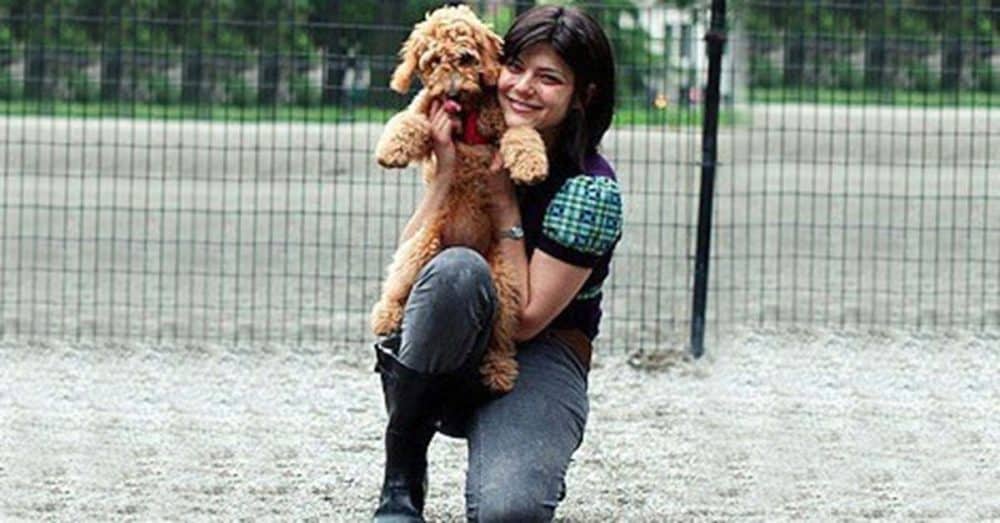 Anna Jane (Annie) Grossman, KPA CTP, co-owner of School For The Dogs in Manhattan, New York, moved into dog training from her successful writing career. Although she had always loved training her own dogs for fun, it was an article she wrote for the New York Times in 2007 that first pushed her to explore the training field.

As a young girl teaching her dogs to roll over, jump, and give a paw, Annie earned the praise of a dog trainer who came to work with her family dog. 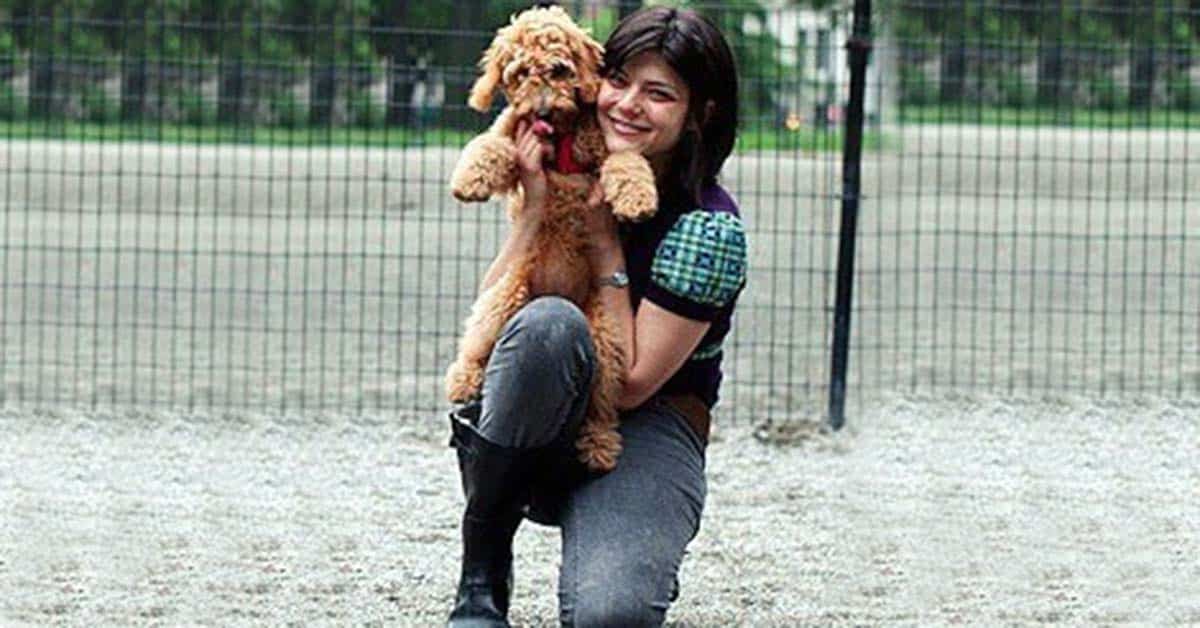 “She told me that I would make a really great dog trainer, and that always stuck in my mind,” says Annie. But Annie pursued journalism after college, writing about people, lifestyles, and trends primarily. Her interest and curiosity in dog training ever-present, Annie observed that the field was attracting more people to it after the success of the television show Dog Whisperer. It was 2007, and that’s when she wrote her article for the New York Times, focusing on people who chose dog training as a “Plan B” career.

Annie admits that the article was, in part, an excuse to research dog training programs for herself and learn about the potential paths toward making a career change. What she discovered was discouraging, however. There were not many reputable training programs to be found, and Annie was left feeling that the dog training industry was “brimming with charlatans who could be doing more harm than good.” This was not an environment Annie sought or would be comfortable in, so she pushed aside the idea.

A few years passed and Annie, feeling more burned out about her writing career, realized that she needed to be more interested in her work in order to be good at it. As she says, “I can’t fake it.” She spent a lot of time hanging out with her dog in dog parks, ruminating on options and avenues for change, considering activities she enjoyed and wondering how those things could somehow be remunerative.

A chance dog-park meeting with the son of someone who had completed the Karen Pryor Academy (KPA) Dog Trainer Professional program introduced Annie to the clicker as a training tool. As her new friend described the KPA course, Annie thought that it sounded much more legitimate than the schools she had researched for the Times article. The very next week she traveled to Philadelphia to meet Louis Mande, her park friend’s father, According to Annie, “Lou convinced me it was a worthwhile course. I applied the next day and was accepted! Looking back, Annie realizes that it was a very quick, almost rash, choice. While she has known herself to make choices that could use more thought, sometimes the gamble works in her favor. In this case, it most certainly did! She completed the Dog Trainer Professional program in 2010.

When Annie started the KPA Dog Trainer Professional program, she was a novice trainer. Before the first unit, she had never used a clicker!

The assignment to teach my dog to lick his nose and put it on cue was a total life-changer. I had never thought about teaching something in that manner, and it was immediately clear to me that there could be immense value in the process of teaching a dog something that really is no more than a ‘trick.’

Annie found it difficult not to have a KPA faculty member, or even an experienced KPA graduate, local to her. “I would have liked to follow a KPA instructor for a week. When I finished the program, I realized I’d never really seen someone teach a full lesson, or a class.” As one of the first KPA Certified Training Partners (CTP) in New York, Annie could not find a trainer in the city with whom she could apprentice.

After graduating from KPA, Annie had the opportunity to work as an associate producer for the Animal Planet television show Too Cute for two seasons, and felt more secure financially. Her unique combination of a journalism background and certification as a dog trainer from KPA is what got her that job, Annie believes. “Although dog training was only a minor part of my work there, I don’t think I would have earned the job at Animal Planet without KPA.

Since 2012, when she left the show Too Cute, Annie has been able to support herself entirely via dog training. She started School For The Dogs with her partner Kate Senisi out of her apartment, a large floor-through Manhattan loft where she grew up. Annie lived in the front; Annie and Kate led classes and lessons in the studio in the back.

Sadly, in December of 2013, a large electrical fire destroyed the apartment and the studio. Using money raised through an Indiegogo campaign (funded largely by past clients), the business was recently re-opened as School For The Dogs’ first storefront location, on East 2nd Street and Avenue A in Manhattan. Annie believes that School For The Dogs is the only storefront, dedicated dog training center in Manhattan. School For The Dogs offers a small store with a well-curated selection of dog training tools, daily classes, a dog training library, playgroups, and more. Just recently, and for the first time ever, Annie turned down an assignment for theNew York Times “because I felt it would be a distraction from my dog training business.”

When asked how Karen Pryor Academy has impacted her work, Annie struggles to answer because she says that “KPA hasn’t just impacted my work: now it IS my work.” Before her KPA training, Annie didn’t know about positive reinforcement training, and thought Cesar Millan was “amazing.”

“As I grew up I was told that the way to get a dog to lie down was to step on his leash really close to his neck. When he was bad I was supposed to bite his ear. We had a shock collar on my dog to keep him from barking, and I was taught the proper way to use two fingers to hit his nose when he was naughty.” As more of a mild and pacifist personality by nature, Annie marvels that she did those things without question. Looking back at the harsh tactics she was taught and used, Annie is struck by how ineffective they were and how ridiculous it was for a child to be told to interact with an animal that way. Even as an adult, before her KPA experience, Annie “alpha-rolled” her 16-pound Yorkiepoo, and growled in his face to remind him that she was dominant.

“Fortunately dogs are very forgiving, but it breaks my heart now that I put him through these trials. I feel embarrassed that I behaved in those ways toward a creature that is completely dependent on me and loves me to the nth degree,” says Annie with regret.

These days, there is very little in Annie’s life that she does not think of in terms of classical or operant conditioning, rewards and punishments, rates of reinforcement, etc. Using her former career as an example, Annie explains:

“The behavior of being a freelance journalist used to be rewarded with money, but the timing of the reward wasn’t good. The check would too often come six months later, after several invoices and many phone calls to a publication's billing department. The pleasure of seeing my work in print was usually delayed as well. As the industry changed and more writing went online, the rewards shifted. More assignments were being rewarded with less pay, and the checks were still delayed—often more so than before. The timing of the reward of seeing my work published became more immediate, but that wasn’t as big a reinforcer to me as money to pay the rent. When my work was posted online, sometimes there were well-timed punishers in the form of immediate negative comments. It’s no wonder the journalism behavior diminished!”

In contrast, dog training is intrinsically rewarding for Annie. The monetary reward usually is immediate and commensurate. That behavior, her new dog training career, has only become stronger.

In addition to her KPA course work, Annie has attended ClickerExpo and Association of Professional Dog Training conferences. She has completed TAGteaching seminars, among other kinds of seminars. The larger part of her post-KPA education has been self-guided, Annie reports.

I have many friends who are R+ dog trainers, and they’re constantly teaching me new things as I find myself dealing with new training problems or areas of interest.

Annie cannot remember when she read a novel last, as all of her current reading time is devoted to books or blogs that deal with animal cognition, ethology, and other topics from the field. After she completed the KPA course, Annie became “pretty obsessed” with the lives and works of B. F. Skinner and John Watson, the fathers of behaviorism. Annie suggests that “it would benefit anyone coming out of a KPA course to read Skinner's Walden Two, what the world might be like if the government were run by KPA instructors!”

Annie sees positive reinforcement dog training as something that starts with pets but doesn’t end there. Her goal is for her clients to learn how to effect change in their dogs’ behavior, and then start training themselves and those around them using smart timing, positive rewards, and clever management. To her clients who come in on day one and ask laughingly, “Can I use this on my wife?” Annie replies, “Of course.” After few weeks, these clients are bragging about how they trained their partner to do various tasks. “I love that,” says Annie.

Another goal that Annie works toward is making training immediately rewarding for her human clients, beyond the reward of teaching their dogs new things. At School For The Dogs many of Annie’s students use iPads to train their dogs to target—something for which the business has received a great deal of press. Annie ex plains that one of the reasons the school started to include the iPads in training is that the behavior is a quick and easy thing to teach—plus it’s rewarding to humans to show off the drawings or “selfies" their dogs make on the devices. This training method sets up an owner for success, Annie believes. “S/He is on the phone or tablet all the time anyway; this is a way to do dog training without having to disengage with the device.”

With clients returning week after week, long after their house-soiling and jumping problems have been addressed, Annie concludes that School For The Dogs is known to have good people trainers as well as dog trainers! Annie is pleased and gratified that two of her clients have gone on to complete a KPA course themselves after attending lessons at School For The Dogs.

So much has changed for Annie since she dipped a toe into a dog training career with her preliminary research in 2007. Through success and disappointment, fire and client kindness, Annie has used her KPA Dog Trainer coursework to realize her dream of “sitting in the park, watching dogs, and talking to people about their dogs.”