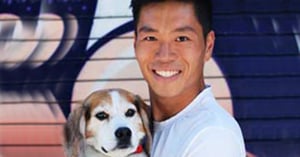 To be as involved in, and as enthusiastic about, as many pursuits as Andre Yeu, you need boundless energy. Andre, the first Karen Pryor Academy (KPA) Certified Training Partner (CTP) in the Greater Toronto area, is the founder of When Hounds Fly Dog Training. In a few short years, Andre has developed his interest in clicker training, watching all that he has learned from the KPA Dog Trainer Professional Program (DTPP), KPA faculty, and “the KPA way” positively influence his life even more than his business.

After attending two ClickerExpo conferences since his graduation from the DTPP, Andre is now scheduled to speak at ClickerExpo 2014 in Norfolk, Virginia (March 28-30, 2014).

In 2009, Andre “Googled” dog trainer programs and found KPA, among others. Ultimately he chose the KPA DTPP because of the outstanding reputation of the Karen Pryor brand, the combination of distance e-learning and hands-on workshops, and the convenient workshop locations. Andre believes the best parts of the program were “the parts in between and in the margins.” The unexpected lessons from his instructor, Steve Benjamin, and from conversations with others during morning coffee, on lunch breaks, and in the evenings were priceless. As Andre points out in his praise of Steve Benjamin.

You gain a lot of wisdom just being around a guy like that for four weekends.

“When Hounds Fly exists because of Karen Pryor Academy,” according to Andre. He had noted the visible need for clicker training in the Toronto area, and even had the name, logo, and website of his business before he enrolled in KPA. But, at that point the business was little more than a hobby business. Andre’s original plan was to find a location and start group classes after completing his KPA program, but by the end of Workshop 1 he was raring to go. When Hounds Fly opened for group classes before Andre even began Workshop 2 of the Dog Trainer Professional Program.

From day one, everything about Andre’s business was organized based on the principles that are taught as part of the business curriculum at KPA. It's been four years now since When Hounds Fly began, and Andre is happy to say, “We’re going strong.”

The “Karen Pryor Academy way” has had tremendous influence on Andre’s life outside of his dog training business. “Since being introduced to clicker training, I have taken all I have learned and applied it inward,” says Andre. “I am a learner, and I can be my own trainer. In the end, everything I do is behavior. I can apply antecedent arrangements myself. I can identify consequences of my behavior, and because I'm usually in control, I can change the behaviors.”

The evidence of Andre’s self-training can be seen in his considerable personal accomplishments. Since finishing the KPA program, he has quit smoking, completed five triathlons (having never run more than a mile before), and become vegetarian. Andre does not see these changes as coincidence. He is confident that he was successful because he understood behavior, including his very own behavior, better after his KPA training.

Now Andre is hoping to play some small role in helping other trainers at ClickerExpo. In the four years since he launched When Hounds Fly, Andre has combined the lessons of the KPA business curriculum with his experience in sales and marketing. The combination has been tested constantly in the real world; with experimentation and refinement Andre has made his business “fly.”

Living and breathing this for the last four years, I really feel like I have some great ideas that I've developed, and I'd like to share them.

Andre reports that he has witnessed a dramatic change in his community. Most of his new students' eyes brighten when they learn that they will be using a clicker; more than half of new students already have clickers. Yet Andre sees, and hears from other dog trainers, that in some communities there is still of resistance to clicker training. Andre’s approach to this objection to clicker training has been to look at it as a sales-and-marketing problem. He says, “I've always applied a sales-and-marketing solution to the problem, and that's the genesis of my ClickerExpo lecture.” Andre’s Session is called We Demand Clicker Training: Overcoming Resistance. “Come to Norfolk to learn more!”

Along with attending ClickerExpo conferences, Andre has continued his training past the KPA Dog Trainer Professional Program in other ways. He has clicker trained chickens under Katherine Ferger's guidance, and attended many workshops conducted by experts such as Kathy Sdao, Patricia McConnell, and Grisha Stewart. He has found other opportunities to learn by attending seminars on working dogs (narcotic/landmine detection) and hanging out with Schutzhund trainers. Currently, Andre is enrolled in an online nosework class.

Andre’s goals will not end there! Although he is busy with the dog training business, Andre is also a co-founder of Treatpouch.com, an online dog training school with a growing YouTube presence. He is proud to announce that one of their videos, Bark and Quiet, has had more than half a million views! In 2014, Andre hopes to spend as much time in front of the camera as he does in the front of the classroom. He laughs, “Who know? Maybe one day soon it will be a network television camera!”