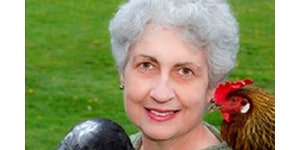 In this interview, Terry shares highlights from her own training career. 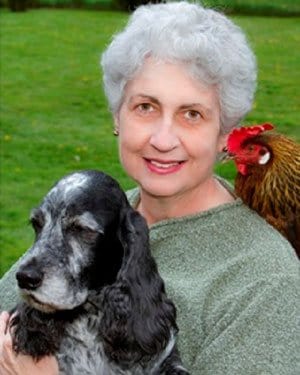 Q: Tell us about the first animal you trained.

A: As a kid, I really wanted a dog, but my parents were against it. In third grade there was a little black dog hanging around the schoolyard. Back then, we played marbles on our hands and knees in the dirt. This dog kept getting in the way, kissing my face. It probably had something to do with my feeding him part of my lunch for a few days in a row! I had an idea: I saved my whole sandwich, and after school “he followed me home!” After my extended temper tantrum, Smokey was allowed to stay forever. That was my first experience at lure-reward training! Smokey got the lure, and I got the reward.

Q: Was there a particular dog/animal in your life that was your most important teacher?

A: Yes, the 120-pound dog that bit me forty years ago was my most important teacher. I wasn’t reading his body language properly. I don’t remember his name… just his face.

Q: What is your favorite activity or sport to do with your own dog(s)?

A: In the early days, I was all about AKC obedience competition—there wasn’t much else to do in the world of performance-dog competition. All of the cool dog activities we have now were not yet invented! My first dog (a German shepherd) was a natural, and I got lucky with all the dogs after that. I got wrapped up in trials, became an AKC judge, started giving workshops, and then switched to AKC tracking tests. I also played around in conformation a bit. In subsequent years, I tried a little of everything as new activities came along. At our training school, I wanted to offer as much variety as possible and was able to make that happen with the help of several talented staff members.

Q: What is your proudest training moment?

A: Here’s one from my beginning days as a clicker trainer. Back in the early ‘90s, I was working in Japan a lot. One of my contracts was with a woman who owned a private shelter. Later, and with my help, she established what was probably the first non-coercive training facility in that country.

A young pig turned up at the shelter. I was running an instructor’s class for about 30 people. Lacking impulse control, I said in front of all of the students, “Oh, let’s train this pig.” Immediately, I wanted to take that back. “Yikes, these people think I know what I’m doing!” At that point the only non-dog animals I had trained were pigeons at the operant lab at school, and then rats and chickens. In my spare time during the course at the shelter, with the help of a clicker and pieces of apple, I taught the pig a six-component, scent-discrimination behavior complete with indication—and also how to ride a skateboard! This clicker stuff really does work! Bullet dodged.

Q: What does a typical day look like for you?

A: If I’m home, I get up late, stay in my pajamas, and work on the computer. I’ve had as many as four KPA classes going on at a time, including international ones where I review and comment on a minimum of 22 videos from each student. My husband spoils me by taking care of the details of our business and by doing all of the cooking! I do a lot of instructors’ workshops and chicken-training camps in far-flung places, so I’m either getting ready for a workshop, or away at a workshop, or recovering from a workshop and its associated jet lag.

Q: What advice would you give to a new training student?

A: Be a lateral thinker. Ask “why not?” Often, there’s more than one correct answer to a question. Be a critical thinker. Don’t believe everything you see on YouTube. To quote one of my training heroes, the late Marian Breland Bailey, “Be a splitter, not a lumper.” To quote Marian again, “The three most important aspects of training are timing, criteria, and rate of reinforcement.”

Q: Do you have any student success stories you can share?

A: Yes! One day, I failed miserably in the Utility ring with my German shepherd. Then, we walked over to the Novice A ring to support four students of mine who were entered in a class of 24. They placed 1st, 2nd, 3rd, and 4th!

Q: What do you do to continue your training education?

A: I pay attention to the learners, both human and animal. They have lots of answers to lots of questions. I go to conferences and take in the sessions, but I also include a lot of networking with the other attendees. Internet resources are helpful, too.

Q: Outside of dog training/dog sports, do you have any hobbies?

A: Nothing major. I like Facebooking with friends, messing around in the yard, keeping in touch with my kids, going out on our boat, and cruising dirt roads in my old Durango to spot wildlife.

Q: If you were a dog, what breed would you be?

From basic to advanced skills, there’s a course for you.
VIEW ALL COURSES