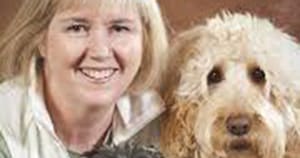 December 2014 KPA CTP of the Month

Dubbed the “Puppy Professor” by a satisfied client years ago, Amy Saletta has used/uses that moniker for her training business The Puppy Professor in Glen Ellyn, Illinois. Through private and group classes, Amy offers positive training for “puppies” of all ages. With a special fondness for working with children and dogs, Amy has also worked extensively with rescued/shelter dogs that are looking for new families or that have been newly welcomed by forever families.

A “self-taught” clicker trainer, Amy started her positive-reinforcement training with books, seminars, and lots of hands-on practice. After attending a seminar with Kathy Sdao and exploring the many offerings of ClickerExpo, Amy heard about the Karen Pryor Academy (KPA) Dog Trainer Professional program. The program seemed to align with her goals and provide next steps for growth in her key interest areas: increasing her knowledge base and skill level, linking up with a community of like-minded trainers, and growing her business. After a first-hand report about the program from Amber Walker, KPA CTP, Amy enrolled in the Dog Trainer Professional Program led by Laura Monaco Torelli in Chicago.

Amy found that the online learning and hands-on workshops of the Dog Trainer Professional program filled many gaps within her clicker education. She says, “My experience with the program led me to better clicker mechanics, a better understanding of the science, a better understanding of canine communication, and a clearer, more concise way of working with my human learners.” By building her knowledge and skills, the program also reinforced Amy’s confidence in herself as a marker-based trainer. Amy calls “the simple goal of setting your learner up for success by providing a training environment and by setting criteria to promote and enhance learning” as one of the most useful takeaways from the program.

Connecting with like-minded trainers was a goal that Amy realized through the KPA program. “This goal has been met beyond my wildest expectations. The Chicago-area KPA community is wonderful and supportive.” Amy has expanded her private training to include a broader population, taking on more behavior cases.

KPA has helped me connect with our local vet behaviorists.

Amy credits her KPA CTP certification as a contributing factor to her invitation to join the staff of a local training center. The center was directed by Julie Dorsey-Oskerka, a co-founder of the A Sound Beginning (ASB) program, with which Amy also became involved. After Julie and her co-founder Pat Rattray released the A Sound Beginning book, Amy seconded andencouraged Julie’s idea of a training class that would complement the book. From her KPA education, Amy was familiar with the necessary modular class structure that would be required. She began to develop the structure, training exercises, and format for the A Sound Beginning classes, and became the lead instructor for a 16-week pilot class using shelter and rescue dogs and their foster or volunteer handlers.

During the pilot sessions, some tweaking of the class structure occurred to create a roll-out program. Training center colleague Liz Mishima, KPA CTP, provided input; Leanne Falkingham, KPA CTP, and Erica Kendroza, KPA CTP, observed classes and added talent and expertise to improve the program as well. Amy says, “It was exciting to have such a large group of KPA CTPs and other positive trainers participating in and shaping the program.” Amy is currently a lead trainer and a Program Director for the A Sound Beginning program. As a Program Director, Amy mentors other trainers as they learn to teach the ASB curriculum. One of her students, KPA CTP Liz Geisen, just completed her first full session teaching the program!

Acknowledging Leanne’s and Erica’s generous sharing of elements of the shelter world through their joint efforts on behalf of the A Sound Beginning program, Amy knows that she has added to her expertise with rescued dogs. Before her involvement with A Sound Beginning, Amy provided volunteer behavior assessments and training to local rescue organizations and, of course, worked with rescue and shelter dogs at The Puppy Professor. In 13 years of in-home private training, Amy had amassed experience with rescue and shelter dogs. She often worked with families who had adopted a dog into their homes but then had adjustment issues without enough guidance for those first days at home. Amy feels strongly about the need for the A Sound Beginning program, especially the classes. She seems them as “a bridge to help create a bond between the dog and his new family.”

A self-identified “continuing education junkie,” Amy feels that there is always so much more to learn! She has attended ClickerExpo for several years running and will take part in the Dearborn (Detroit), MI, conference in 2015. In addition to many other seminars in years past, this year Amy attended a Kay Laurence seminar and completed Dr. Susan Friedman’s course, Living and Learning with Animals. Having completed the KPA Puppy Start Right for Instructors course, Amy says, “The Shelter Training & Enrichment course may be in my future as well.”