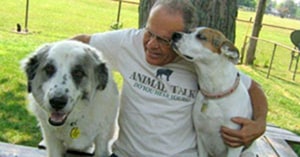 Jim Turner, KPA CTP, has a lifetime of experience in caring. A pastor for 50 years, a marriage and family counselor for 20 of those years, and a law enforcement officer with a specialty in PTSD for 12 years, Jim is now “retired.” But while he may be retired from the professions listed above, Jim continues to work kindly and thoughtfully, offering attention to the people and animals he encounters through his animal training business, ANIMAL TALK. Not only do Jim’s wife, children (4), grandchildren (12), and great-grandchildren (2) enjoy Jim’s experience and gifts, but the pets and pet owners he works with do as well.

Jim came to dog training when a service dog entered his family. Linda, Jim’s wife, is hearing-impaired. Jim and Linda arranged for a service dog—and the professional training necessary to use the dog’s skills and talents most effectively. Jim enjoyed the experience of training with the service dog so much that he began to investigate dog training as a retirement career for himself. Having read a book by Karen Pryor, Jim searched online for a Karen Pryor Academy (KPA) Certified Training Partner (CTP). He found Dave Thatcher, who had completed the KPA Dog Trainer Professional program. Dave told Jim that the KPA course was “the Cadillac of training courses.” With that recommendation and with encouragement from KPA staff members, Jim enrolled in the next scheduled class and threw himself into the coursework.

Jim felt challenged by the KPA Dog Trainer Professional program. He says, “This program is not for the faint of heart!” One of the most difficult assignments for Jim as he moved through the KPA program was the requirement to train a second species. Jim worked with an adult chicken (its feathers blinded Jim as he attempted to leash the chicken), a cat (Jim was attacked by the cat when he locked them both in a bathroom), and a gerbil (another failure, but Jim won’t share those details!). Discouraged, Jim contacted his KPA instructor, Julie Shaw. Julie didn’t agree with Jim that he had failed the assignment. She pointed out that he actually learned something very important. In Jim’s words, he learned that “you cannot train what you just traumatized.” These words became an important talking point in, and one of the best lines from, Jim’s KPA class.

In fact, Jim did go on to succeed in training a second species. Even though his instructor had passed him on the second species assignment, Jim tried the assignment again. He bought a baby chick and nurtured “Frick.” (Originally there was a second chick, “Frack,” but he died). When Frick was several days old and responding to Jim’s care, Jim began to train the chick. What a wonderful experience Jim had! He reports. “Frick would climb all over my dogs. He would play between their paws. They actually played together!” Jim trained Frick to perform several behaviors. He took videos of those behaviors and brought the videos to class to show Julie Shaw and his classmates. “I don’t quit what I start,” Jim declares.

One of the most important things Jim learned as he completed the KPA coursework and hands-on lessons was to build a team around a dog. When Jim works with pets, he includes the animal’s veterinarian on the team. Jim has also included the pet owner’s medical doctor on the team if the owner has a health issue. Including the medical doctor is very important when Jim trains a service dog or a companion dog.

In his business, and in his life now, Jim is thankful for KPA and its philosophy. Before KPA, Jim only knew of traditional training methods. Now he is proud to tell clients, “My behavioral method is force-free,” and he collects choke chains and prong collars.

I could never rely on training other than marker training. Whether it is a clicker, tongue click, thumbs up, or a light, there has to be a way to communicate to the learner, to say ‘Yes! That’s correct. Here’s your reward. If it is not fun for you and/or the animal, it is not training.

Jim’s first experience with the clicker was with Cooper, a flat-coated retriever; Cooper was Jim’s KPA dog. Cooper was not easy to train. After a few weeks Jim did not think he would change any of his unwanted behaviors—as Jim remembers, all of Cooper’s behaviors were unwanted! Although Jim and Julie Shaw talked about changing dogs for the course, Jim thought, “If I can’t be successful with Cooper, how could I feel confident with a client’s dog?” With the encouragement of his class, Jim decided to keep Cooper, and Cooper did change. When Jim and Cooper performed the required 10-behavior chain, Cooper received a 99% and a standing ovation.

Professionally, Jim’s first aggressive dog was named Gracie. At Jim’s suggestion, she was evaluated at Purdue Clinic. At the start, Gracie went to the vet medicated and muzzled. Jim began working with Gracie, from a distance and under threshold, walking into her view each time she looked at him. The end result of Jim’s training with Gracie was that after six months Gracie could go to the vet without medication or muzzle. She is handled without fear, and will even express affection. According to Jim, all of this was accomplished with marker training, patience, affirmation, and love.

In addition to his work with aggressive dogs, Jim enjoys working with special needs dogs. Andy was a deaf dog that jumped on people, mouthed people (often breaking the skin), and had no concept of loose-leash walking. Jim used a little key light as a marker. In a few months the jumping had been replaced by a sit behavior and the mouthing was extinct.

In other situations, Jim works with the dogs of people who have special needs. Jim once worked with a woman with dwarfism, named Amy, and her golden retriever, Max. Amy had many physical needs and would require surgery in her future. Building a team, Jim consulted with Max’s vet and physical therapist, Amy’s surgeon, Amy’s physical therapist, and Amy’s family doctor. Jim, Amy, and Max trained in malls, stores, churches, airports, and at the college where Amy had professional commitments. With marker training, Max learned more than 150 behaviors. Max brings Amy her socks, helps her remove her coat, pulls carts, and opens doors—both push buttons and push bars. One time a breeze blew a picture to the floor in Amy’s office. Max picked it up and brought it to Amy. He started out as a mischievous adolescent, and at the end of his training, Max was a professional. When, at the end of their training, Amy said to Jim, “Now I feel normal,” Jim’s eyes filled with tears.

Working with grieving families, so much a part of Jim pastoral, counseling, and law careers, continues to be part of Jim’s life. With other professional therapists, Jim helped form a support group for families grieving animals. The group also served as a teaching tool for graduate students in psychology. Jim is part of burial services for pets, as he was in law enforcement when police dogs and police horses died. Jim believes this kind of work is very important for the ongoing health of those left behind. When Jim goes to be with a family that is putting their pet to sleep (a service for which he does not charge), his hope is not only to help the humans grieve, but also to help other animals in the home face the death.

As a pastor and therapist, Jim believes the KPA way to be consistent with his philosophy of life.

Had I been familiar with KPA when I worked as a pastor and therapist, I would have had a clicker in my office.

As Jim points out, clicker training helps you remember how people need to be treated—positively and force-free, just like an animals. Working with pets and their families, Jim sometimes encounters in-home conflicts. In training, Jim helps family members work together and teaches them how to communicate differently. The humans often realize that they are the problem. Jim is pleased and gratified to see relationships in the home healed as the family dog is trained. “I think of my animal career as a calling as much as my pastoral work. I am grateful for the gifts and skills that feed my passion to help heal those who hurt, in any sphere I can influence.”

In addition to his team-based training and consultation work with pet dogs, fearful and aggressive dogs, service dogs, and all of their human families, Jim finds other ways to do good works. He has testified in court cases, fighting blood sports and putting the people involved into prison. Jim works with the ASPCA when possible and has had opportunities to speak to rescue groups.

Although he has not been able to travel the distance to ClickerExpo conference, Jim continues to learn. He reads articles and watches videos by Ken Ramirez, Karen Pryor, and others in the field. “So much to learn, so little time!” Jim is very grateful to those who taught him about positive reinforcement training. “My successes with animals are a result of their patience and training. I wish I had entered this career long ago.”

Jim says, “At this point in my life I am content with my opportunities. My heart is in working with private clients, through clicker training or TAGteaching, and impacting my piece of the world here in Indiana. I will follow where that takes me. I see myself living out my life in this ministry career.”