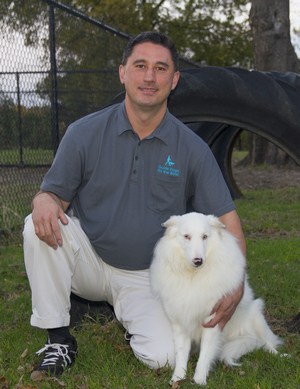 Wayne Dooley, KPA CTP, left his corporate job at AT&T to work fulltime with animals. Now known as “The Dog Trainer Guy,” Wayne offers in-home training through his business of the same name.

In partnership with Animal Hospital of Rowlett Veterinary Clinic, Wayne provides puppy parenting classes to patients and families, as well as mental stimulation activities for pets that are boarding. Wayne also volunteers with service dogs in training.

When Wayne made his move to live and work his dream, he began by volunteering. He invested a great deal of time exploring various ways to work with animals, and absorbing the wisdom of those already in the related fields. In interactions with trainers, vets, and behaviorists, time after time Wayne heard about Karen Pryor and the positive reinforcement philosophy of training. “After doing research on my own about Karen Pryor and the Karen Pryor Academy (KPA) programs, I wanted to learn from the program that was deemed the finest in the field for dog training,” says Wayne. “I wanted to learn from the best!” In April, 2015, Wayne completed the KPA Dog Trainer Professional (DTP) program in Magnolia, Texas. His instructor was Debbie Martin. Calling the program “very useful and illuminating overall,” Wayne found that learning to break down desired behaviors to smaller, and then even smaller, measurable increments was his most valuable lesson. With this knowledge, “I can clearly communicate what I am asking an animal to do,” reports Wayne. Being able to communicate the logic behind this training technique to clients is also valuable to Wayne day-to-day. Since completing the KPA course and becoming certified as a KPA CTP, Wayne has found immediate and continuing value in his education. “The concepts of positive reinforcement training are really getting out to the public; from a trainer standpoint, I see that positive training is highly requested,” Wayne says. Client referrals have come from vets and veterinary behaviorists who know that Wayne is a KPA CTP. In addition, Wayne reports that “the general public wants the best methods of training.” After doing dog-training research online, many clients make their way to the KPA website to find a trainer for their pets. “I have been fortunate to have been selected to train several pets through the ‘Find a Trainer’ search on the KPA website. I am just one of many capable trainers available to dog owners,” says Wayne.

This understanding has helped Julia “problem-solve better with clients, when their dogs have unintentionally learned a chain the clients don't like!” reports Julia.

As a Family Paws licensed presenter, alot of Julia’s training work is done with families that are expanding with new children and/or pets. “There are unique challenges preparing families with dogs for life with children. The challenge that always stands out for me is that of time and energy; there is probably nothing that new parents have less of than time and energy!” Julia explains that “while one training plan may work wonderfully for a retired couple, or for a young couple without children, that plan may not work at all for clients with a new baby or young children.” Her quest to find creative ways to train and manage the behavior of animals for clients with very little time has been a great learning experience for Julia. “It has been quite useful as I find my own way with two little ones.”

The concepts of positive reinforcement training are really getting out to the public; from a trainer standpoint, I see that positive training is highly requested.

Lessons from his KPA experience have been helpful to Wayne as he works with service dogs in training as a volunteer for Guide Dogs for the Blind (GDB). AGDB puppy-raiser since 2013, Wayne teaches good manners and basic obedience. He reports that skills from the DTP program have really helped him communicate with the pups and modify training plans to each dog’s needs. Wayne has raised two puppies for GDB; both passed all eight phases of training and are working guides, one in Maryland and the other in Toronto, Canada. Working with Dr. Downes at Animal Hospital of Rowlett Veterinary Clinic, Wayne conducts many puppy socialization classes for “long-time pet parents to brand-new ones.” In several cases, “long-time pet parents have been stunned to see how quick and easy it is to implement new concepts and behaviors,” Wayne reports. Wayne has also worked with clinic staff on what he calls “positive distractions” for dogs that might be a little fearful or reactive during procedures. “We are moving forward and implementing the ‘Fear Free’ initiative at the clinic, too.” When it comes to his human students, Wayne believes that the KPA program showed him how to teach so that a learner can understand what is expected and progress in small steps. That way, there is a greater chance for success. Per Wayne, “when you set a learning experience up for success it usually happens.” At the clinic, Wayne is continually learning as he problem-solves scenarios and dilemmas that everyday pet owners face. This hands-on experience is often combined with extra reading and research. “I have explored scent work, incorporating what I learned in the DTP program, but have not progressed far yet.” Wayne sees himself reaching for other KPA-taught skills as he expands his work with guide dogs and therapy dogs, and, hopefully, with medical-alert dogs in the future. Considering a “fun fact” that he shared, Wayne may have opportunity to learn more about how dogs help in the medical arena. “I am the trainer for ‘Shiloh,’ the house therapy dog and ‘Chief Cheer Officer’ for the Ronald McDonald House of Dallas. I volunteer as his trainer and teach his therapy team how to handle him in therapy situations.” Hurray, for Shiloh, and for you, Wayne!