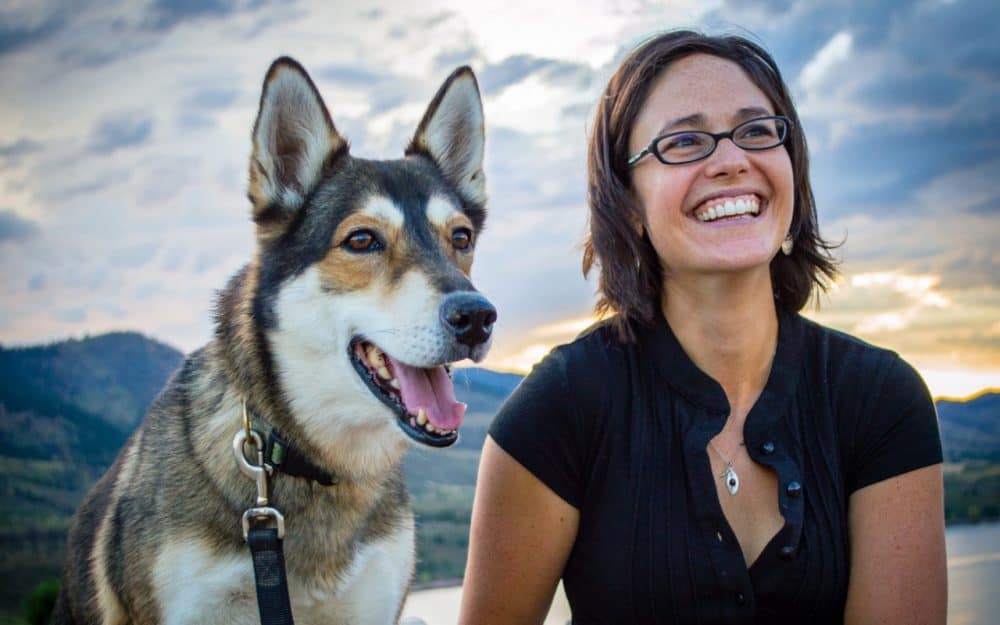 While Amy Creaven’s career focus has switched from intensive care nursing to dog training, she has not abandoned her nursing skill set or her sensitivity to those in pain or struggling. A Karen Pryor Academy (KPA) Certified Training Partner (CTP) since 2010 when she completed the Dog Trainer Professional (DTP) program, Amy offers positive and professional training at her business Trust Your Dog Training in Fort Collins, Colorado. She focuses on behavior issues such as aggression, separation anxiety, and fear; on agility; and on an interesting specialty: rattlesnake avoidance. 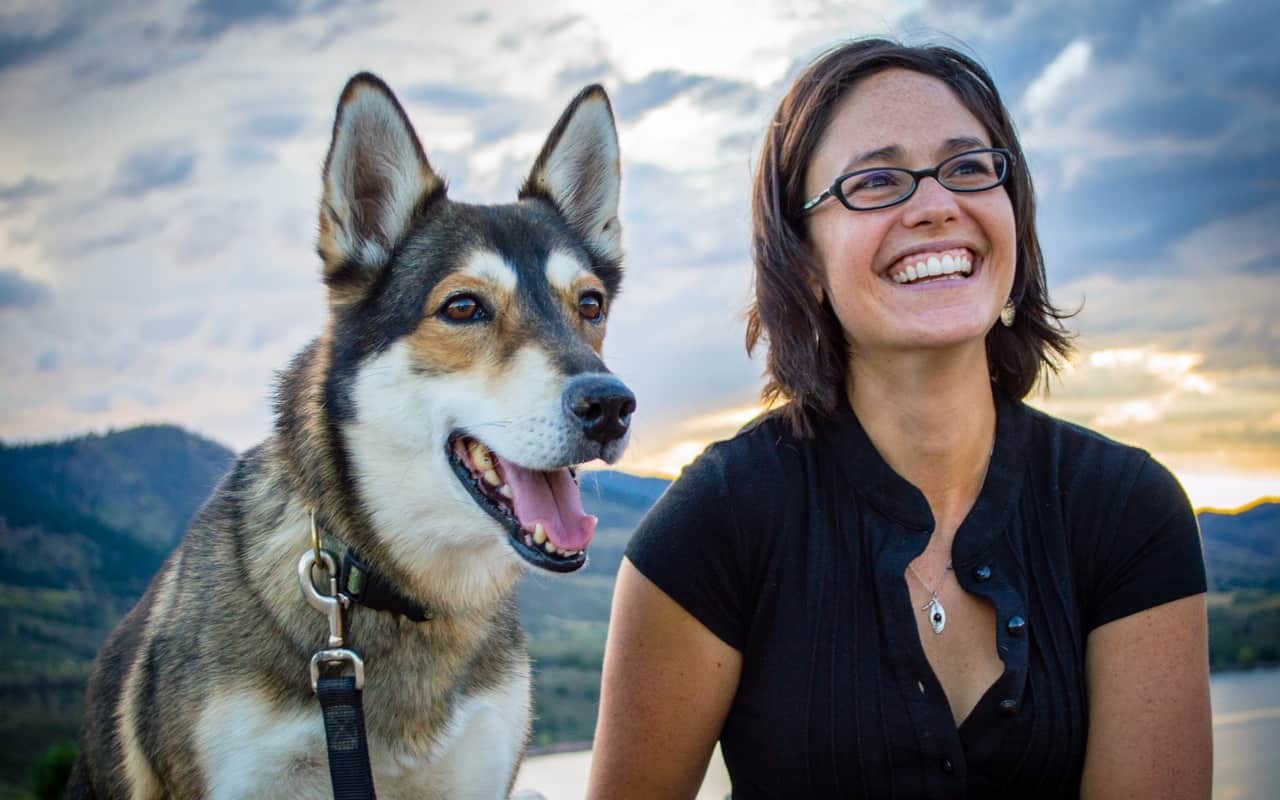 When she trained her own dog in 2009, Amy realized that she felt more invigorated by training work and learning about animal behavior than she did by nursing. Looking to make the career change to training, Amy researched certification programs and concluded that KPA best fit her needs. Under the direction of Nan Arthur, Amy completed the DTP program in Boulder, Colorado, with Lindsay Wood Brown and Shelly Brouwer, who are now KPA faculty members themselves. Post-graduation, Amy was invited by Lindsay to join her staff at the Humane Society of Boulder Valley. Amy hasn’t “looked back to bedside nursing since.”

Amy acknowledges that “KPA started my career in dog training,” but believes that the opportunities and connections that have come from her KPA association have been of at least equal value. She relies on like-minded trainers and the KPA network. “I haven't found another group of trainers that is as supportive of each other. We're not competing with each other but helping each other get clients and keep them.” Amy has fellow KPA graduates in her geographic area. “We call each other on cases and help when we can.”

I haven't found another group of trainers that is as supportive of each other.

While Amy’s DTP experience was several years back, she remembers her third workshop as the most difficult, but also the most rewarding. “It was really where the rubber met the road for me,” she says. Watching the dogs in her program respond as expected to complex cues was “cool.” Amy has continued to use adduction and other important DTP concepts to solve complex behavior problems and break down behaviors into small enough pieces for dogs and their owners to digest easily.

Amy’s hard-earned nursing skill and expertise are useful every day. She says, “That background often gives me a better understanding of people’s limitations or expectations when I am working with their dogs.” High-stress ICU nursing required an attention to detail and precision that Amy retains and utilizes. “That context provides perspective when I get calls from clients who are in crisis with their dogs.” Amy believes that her medical experience also helps her deflect drama that can create what is referred to as moral injury among medical professionals and others. Reducing the odds for stress and the negative emotions that define moral injury is, of course, a valuable goal applicable to animal care professionals as well as those who practice medicine.

Creating partnerships and teams with local veterinary professionals is something that Amy prioritizes in her business. She especially loves working with veterinary behaviorists “because they often confirm where my training plans are right, but they also provide a second set of eyes on my cases, offering ideas that I may not have thought about.” Amy often works with difficult behavioral cases and sometimes feels that “clients could benefit from the addition of pharmaceuticals that I don't have access to,” another reason for referring to and working with veterinary professionals. “I love that many of my clients have benefited from the addition of pharmaceuticals into the treatment plan. Vet behaviorists have the knowledge to pick the right ones or change and titrate medications as needed.” On her website and in practice, Amy encourages interdisciplinary cooperation to avoid professional isolation and “because we all need each other to help the dogs and our clients.”

TAGteach certified in 2013, Amy uses those skills with her clients, “although they often don't know it.” Recently, Amy broke down into TAGable parts a handling behavior she was directing a pet owner to do. Her client was struggling, but teaching the behavior in stages brought success. “It wasn't perfect, but it was so much easier than just repeating what I was saying louder or getting frustrated and giving up,” Amy recalls.

Amy says she “uses clicker training every day!” at home and in other areas of her personal life. Her effort goes into reframing events so that everyone involved can benefit. Amy and her husband talk about interpersonal interactions within their young family and use clicker training “to find grace in tough situations.” Amy admits that “I'd be lying if I said I haven't used an actual clicker (and food) to teach my two young children to use the toilet or to touch a wall opposite the oven so I can get hot food out.” The family’s animals also benefit from positive training.

For a while, there were unusual animals at Amy’s home. A few years ago the family boarded three Scottish Highland cows on their property. “While they were here, I clicker trained them to follow a target and to follow me. The cows lost their fear of people and we got to know their personalities.” When a farmer came to move the cows to another pasture, he was unsuccessful getting the cows into his trailer. “So out I came with my target and a bag of clementines (did you know cows like clementines?). Within 20 minutes the cows were loaded to go,” Amy remembers.

Rattlesnake avoidance is an issue for dog owners and trainers, particularly in the western and southwestern United States. But, according to Amy, “rattlesnake-avoidance training without shock has been an overlooked niche for too long.” Her involvement was launched when she was asked to co-present a multi-topic workshop. The workshop shared information about rattlesnakes, training, canine body language, basic manners, and snake avoidance. Over the past three years, Amy has come to the conclusion that “if I want to compete with shock-collar trainers, I have to offer a comparable workshop. A ‘one-and-done’ type of offering.” She has pared down information and offers “just what people need to know about rattlesnakes, safety, and teaching dogs to avoid the rattlesnakes.”

Amy created and curated her current presentation carefully. “First I looked for what others had to say on the topic, using KPA threads from Yahoo groups, and I also reached out to Nan.” Amy obtained written statements from vets, too. To present a solution to the problem, Amy had to study and process the problem itself. “What do we want dogs to do when they find a rattlesnake? What alternative behavior do we want the dogs to perform?” Amy concluded that “moving away from the snake is not specific enough; that behavior is not ‘observable’ if you don't know there's a snake there.”

Working with clients with varying needs, Amy has developed behaviors that are “out of context” that a dog can offer when the dog perceives that a rattlesnake is nearby. The behaviors are incompatible with approaching the snake, of course. “I've had the opportunity to work with hunters, search-and-rescue teams, hikers, and large property owners on this problem. I think that we've been able to come up with behavior variations that work for everyone.” Amy says that it is fascinating to see how quickly dogs start to respond to the training. “Most workshops have 4-6 minutes total exposure to the rattlesnake decoy and dogs start to offer the desired behavior on the exposure to the snake alone.”

Amy says that there are challenges to offering positive-reinforcement rattlesnake-avoidance training. She battles preconceived notions that you can’t train without the use of a shock collar, but also struggles setting up a realistic decoy. It is impossible to train the behavior with real snakes without dangerous exposure, of course, so Amy uses a realistic snake decoy. She assembles it incorporating “the closest scent I can (rattlesnake shed) and plays a phone recording of rattlesnakes under the decoy.”

As often as she can and at least once a year, Amy attends workshops, seminars, and conferences. “I want to stay current, but I also want to network with others.” Participating in a program at The Ranch “is definitely on my to-do list.” Amy is interested in clicker training instinct-based behaviors (herding, hunting, protection work) and is dabbling in herding with her own dog. “I am uncomfortable when someone says you can't train something with a clicker, so I want to see more from people who are clicker training these kinds of behaviors.” From the little she has seen, Amy thinks there is room for improvement in communication between dogs and handlers when sheep are present. “It's hard, though, when the sheep are the reinforcers and you have very little control over them!”